The paradox of thrift — for real

The paradox of thrift is one of those Keynesian insights that largely dropped out of economic discourse as economists grew increasingly (and wrongly) confident that central bankers could always stabilize the economy. Now it’s back as a concept. But is it actually visible in the data? The answer is, and how!

The story behind the paradox of thrift goes like this. Suppose a large group of people decides to save more. You might think that this would necessarily mean a rise in national savings. But if falling consumption causes the economy to fall into a recession, incomes will fall, and so will savings, other things equal. This induced fall in savings can largely or completely offset the initial rise.

Which way it goes depends on what happens to investment, since savings are always equal to investment. If the central bank can cut interest rates, investment and hence savings may rise. But if the central bank can’t cut rates — say, because they’re already zero — investment is likely to fall, not rise, because of lower capacity utilization. And this means that GDP and hence incomes have to fall so much that when people try to save more, the nation actually ends up saving less. 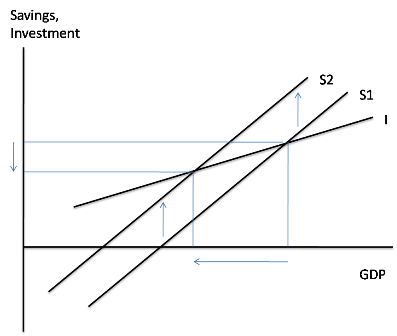